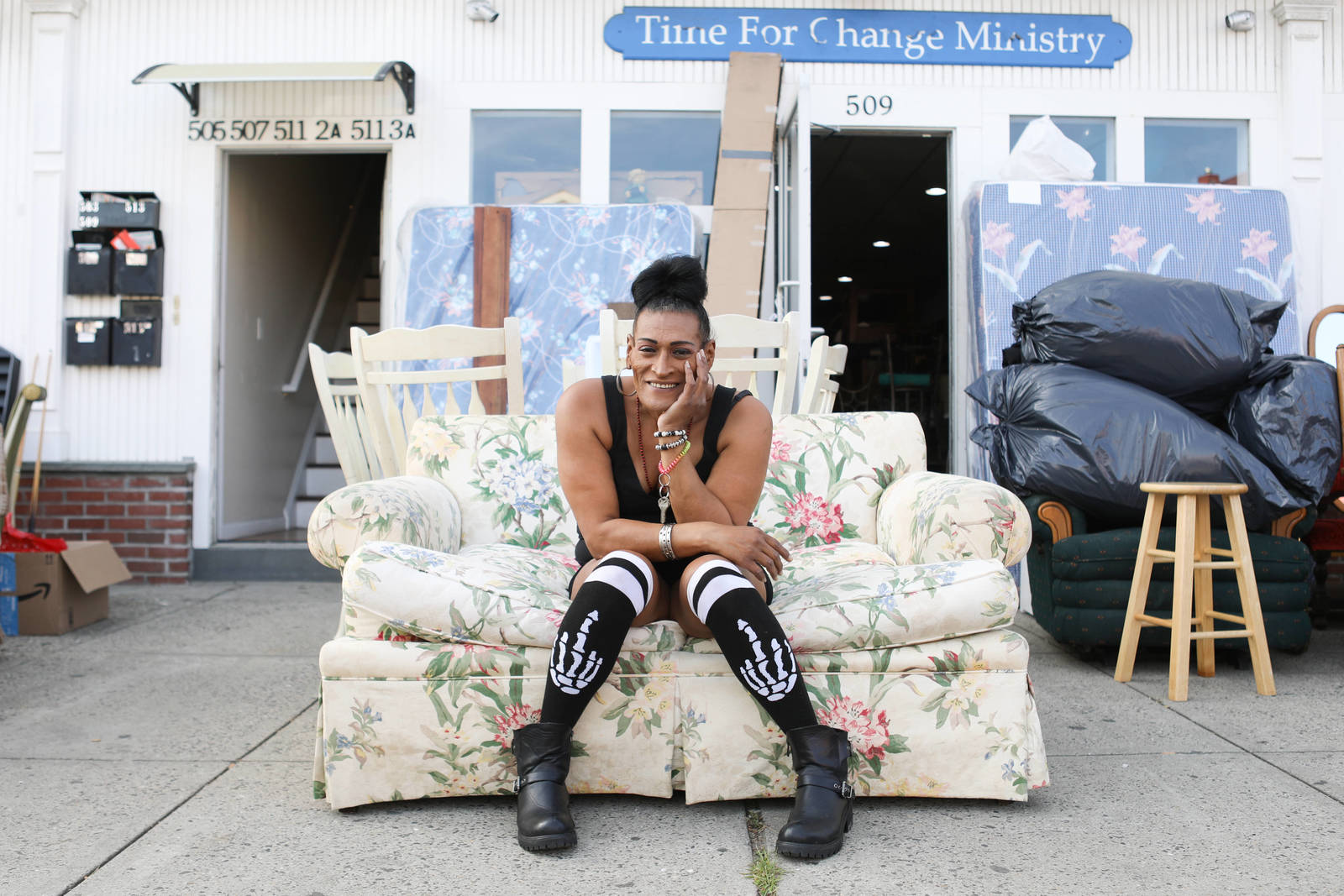 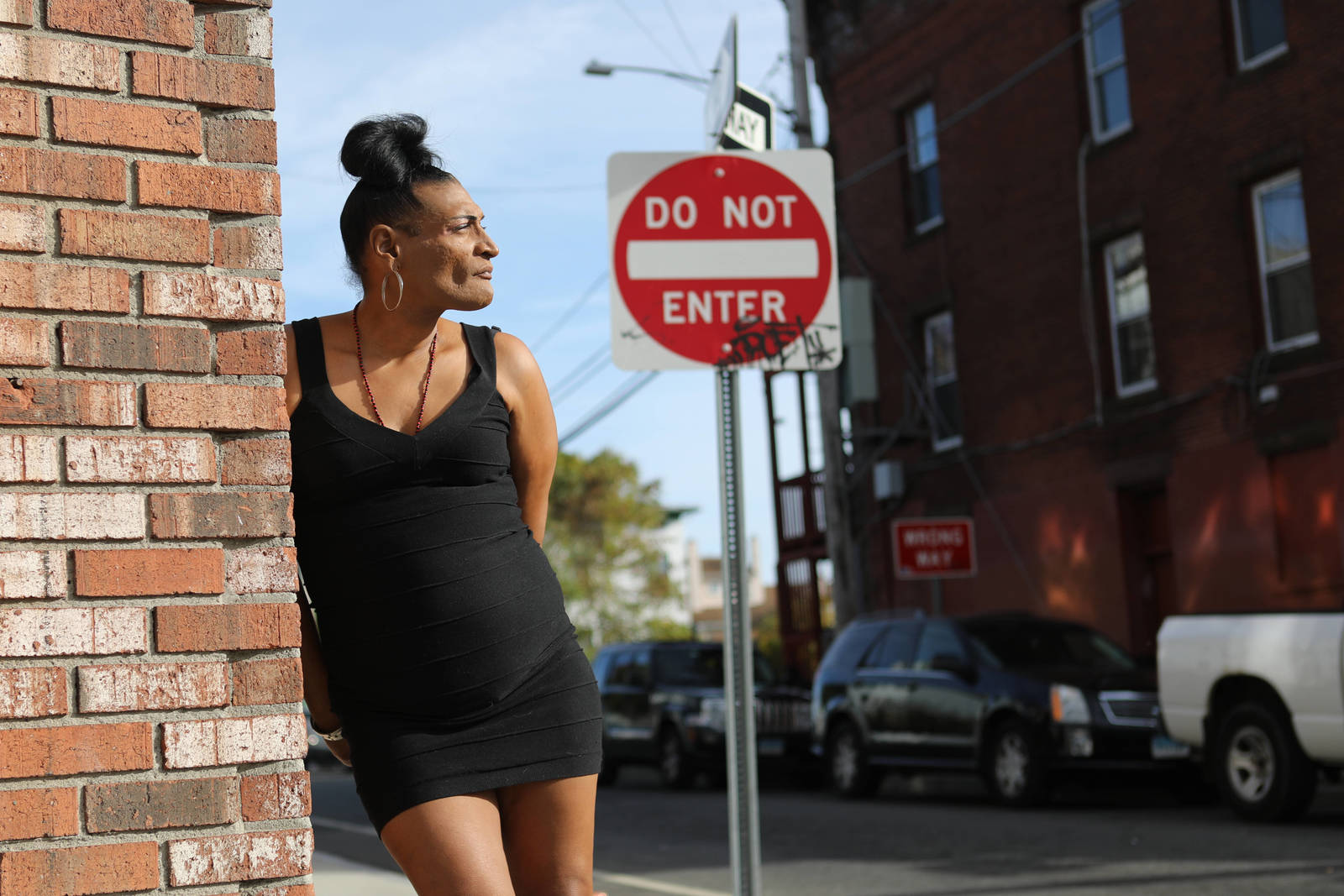 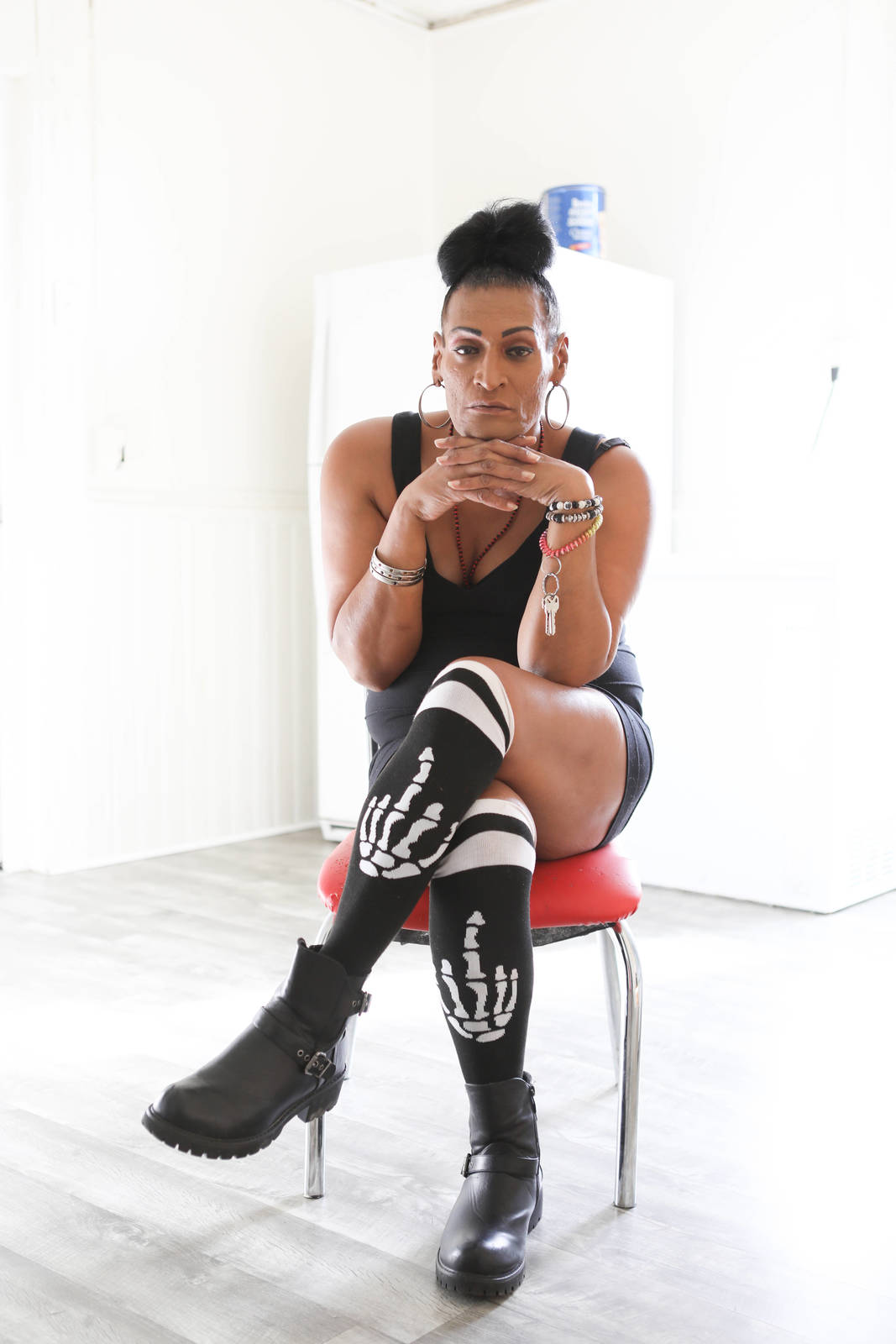 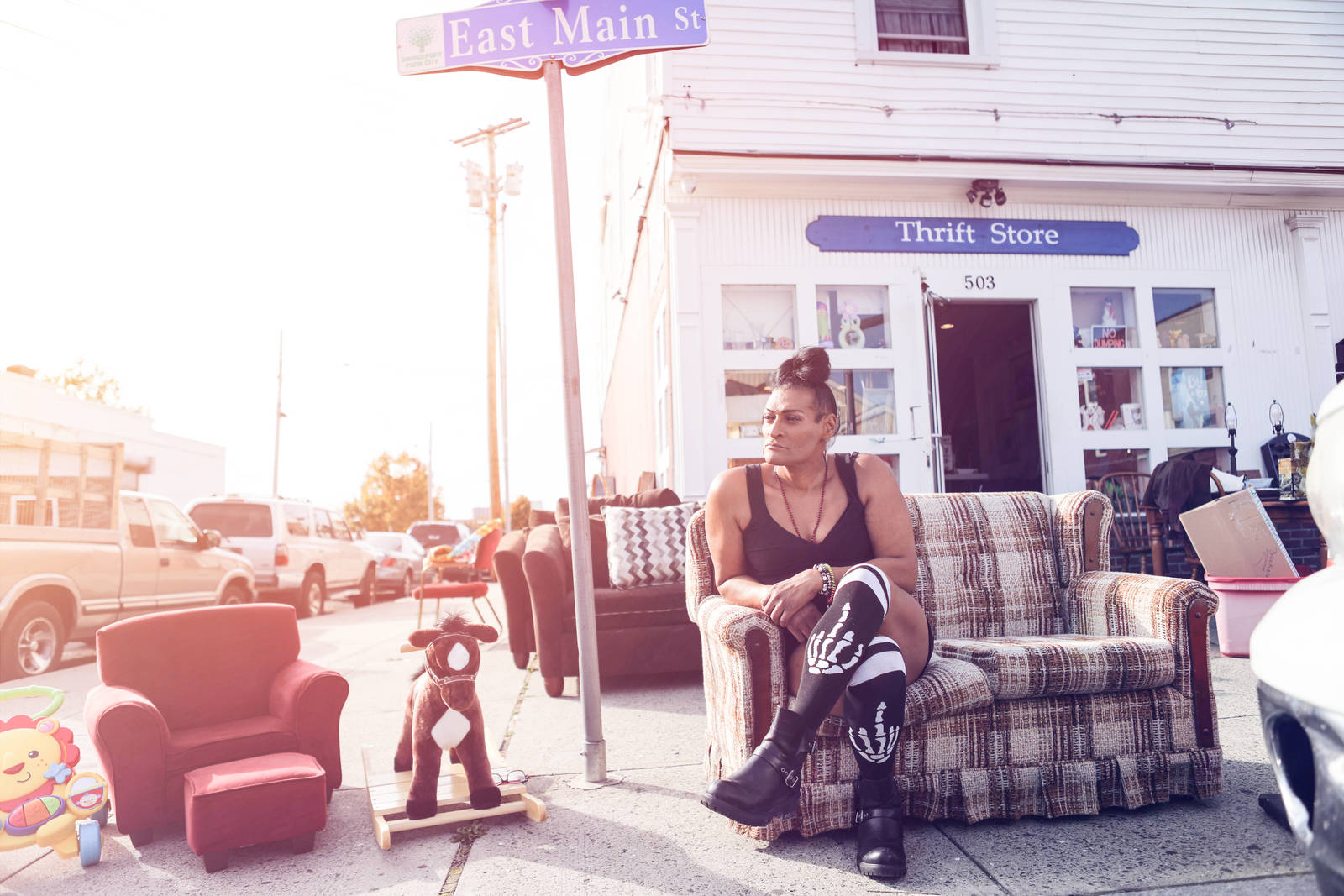 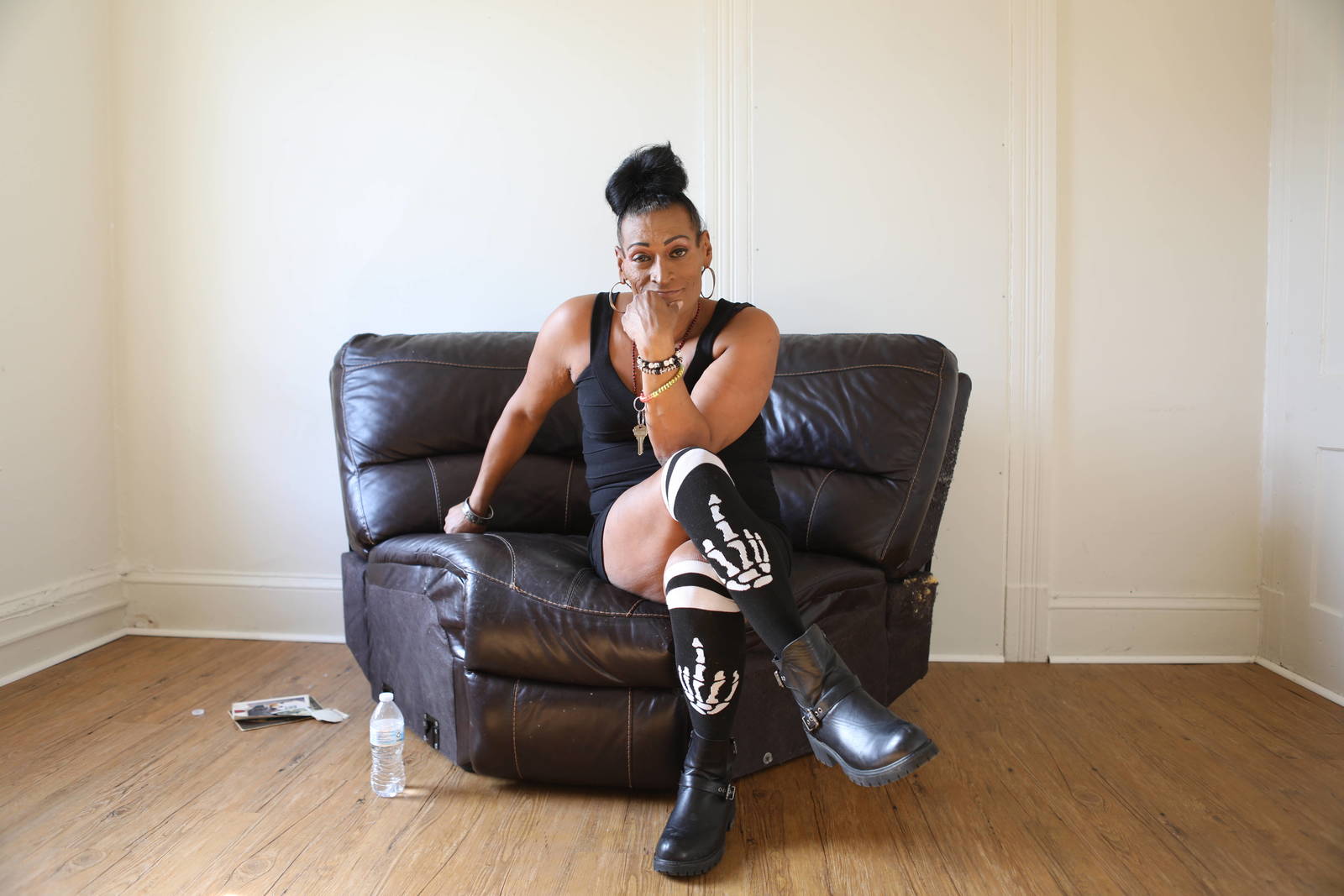 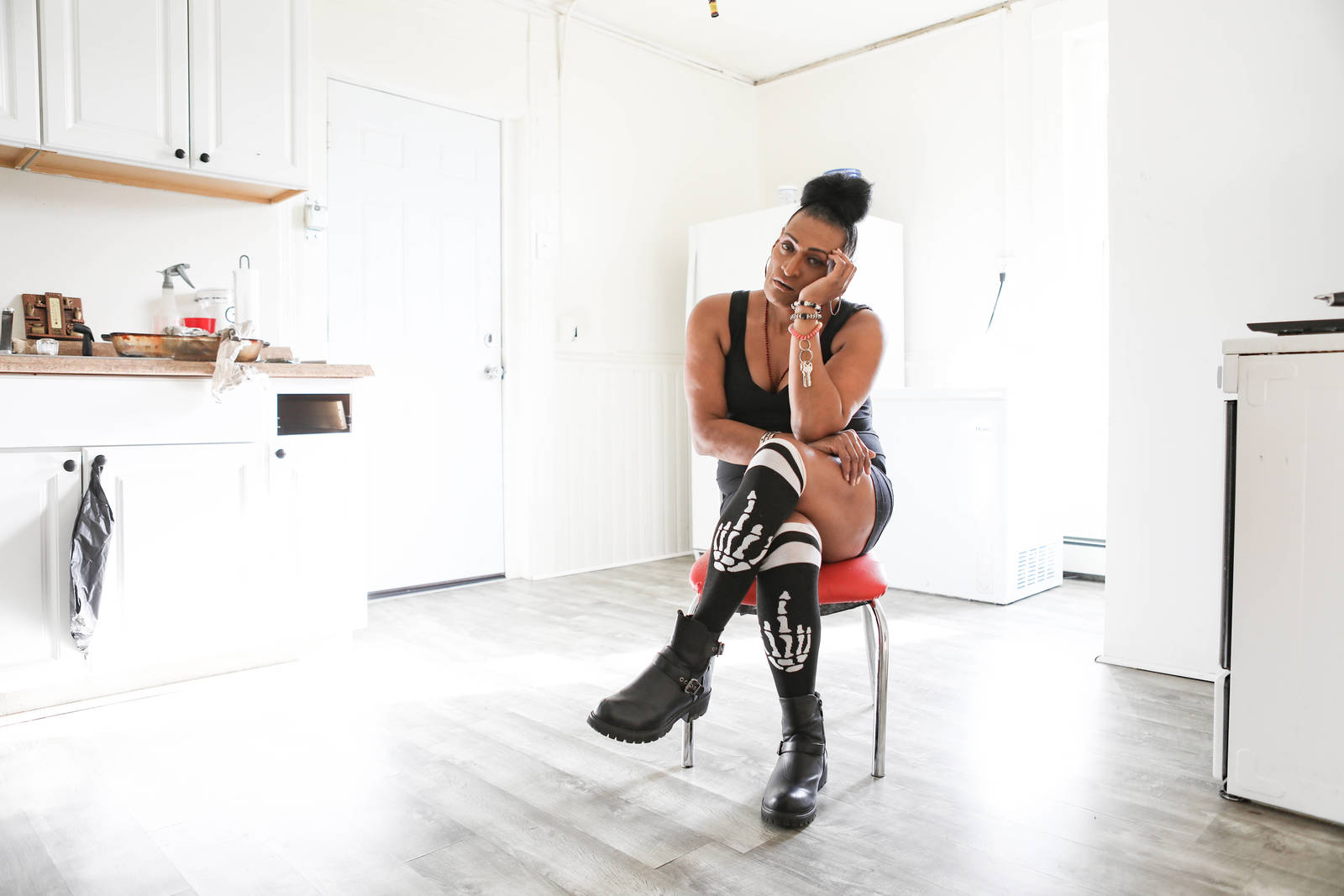 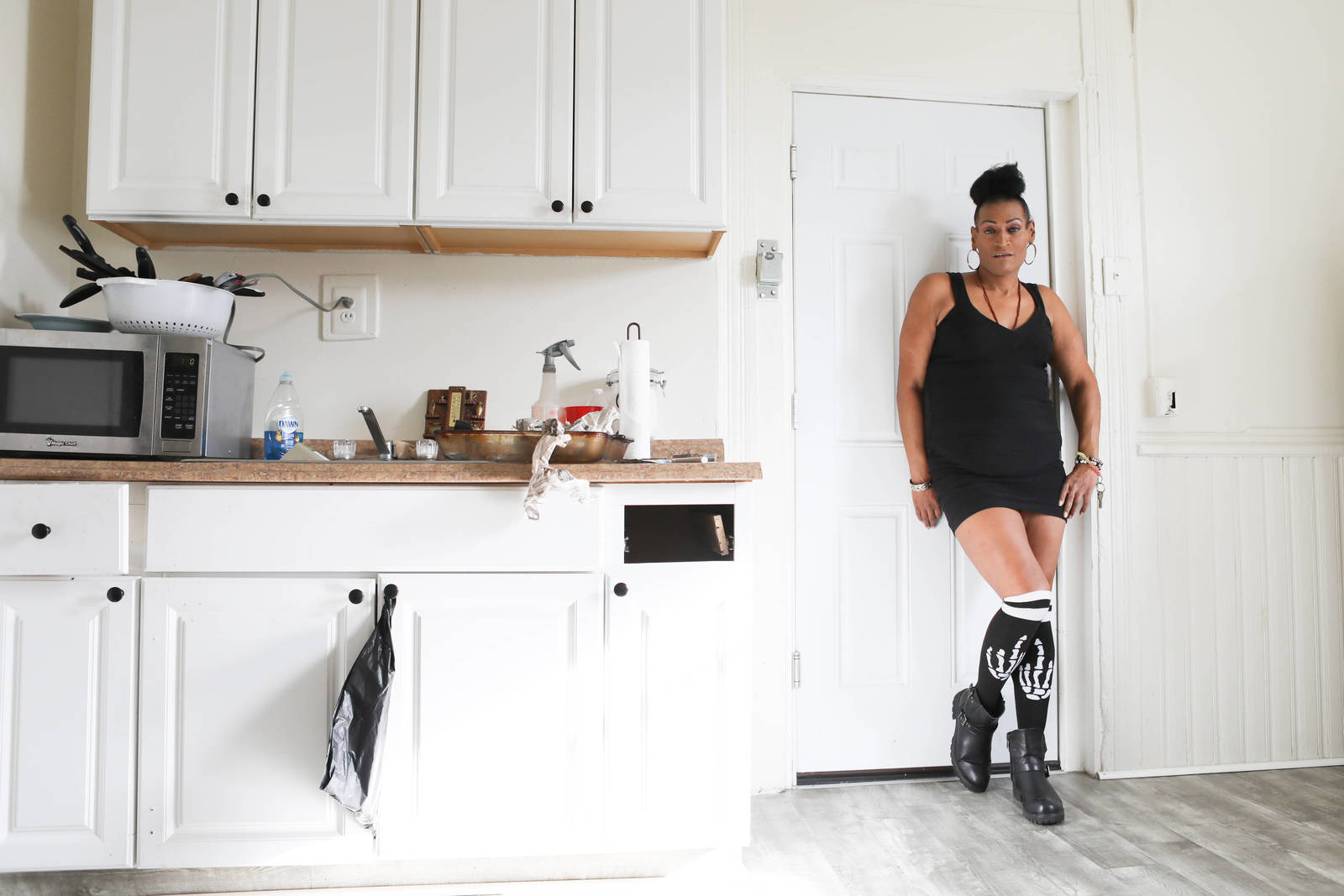 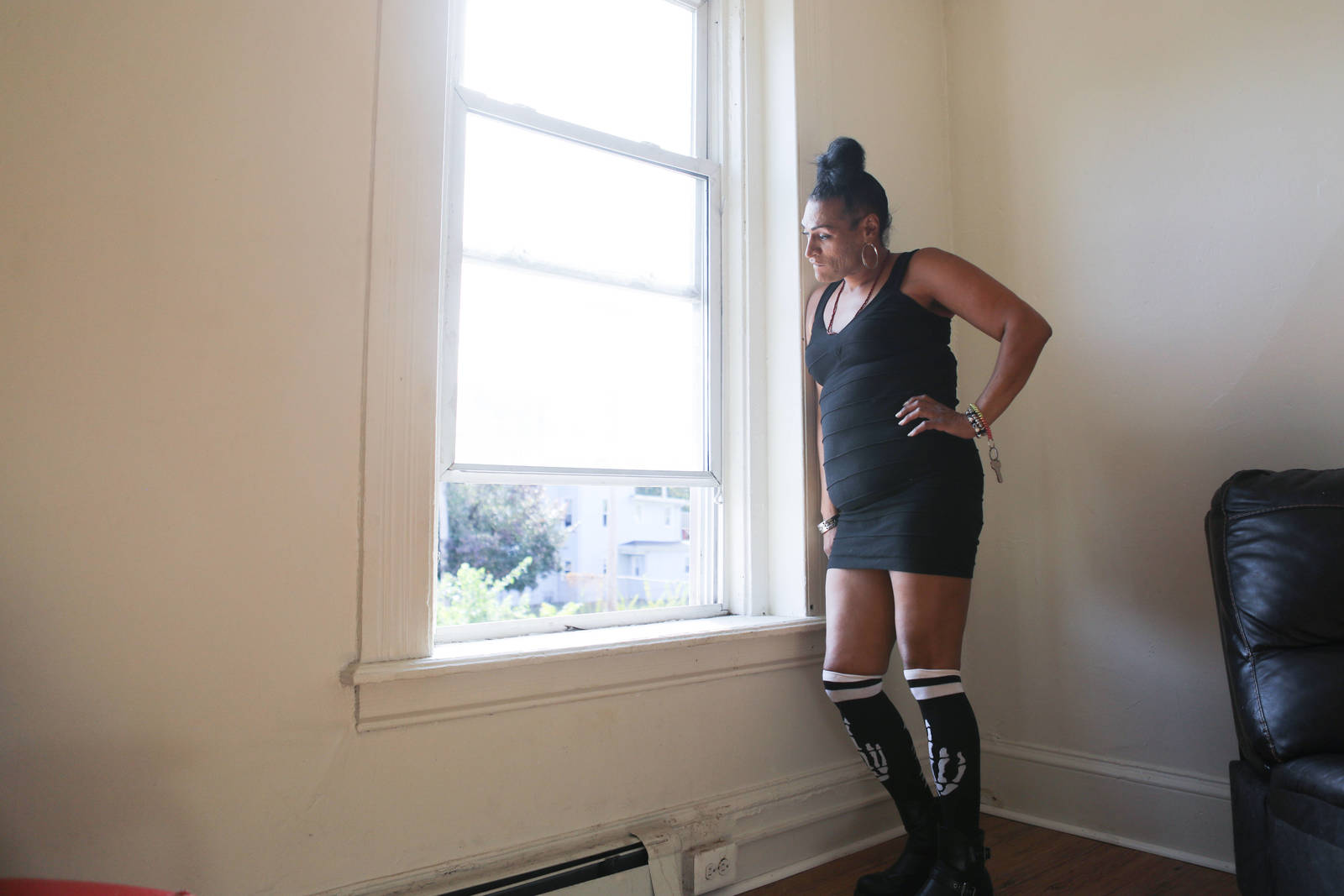 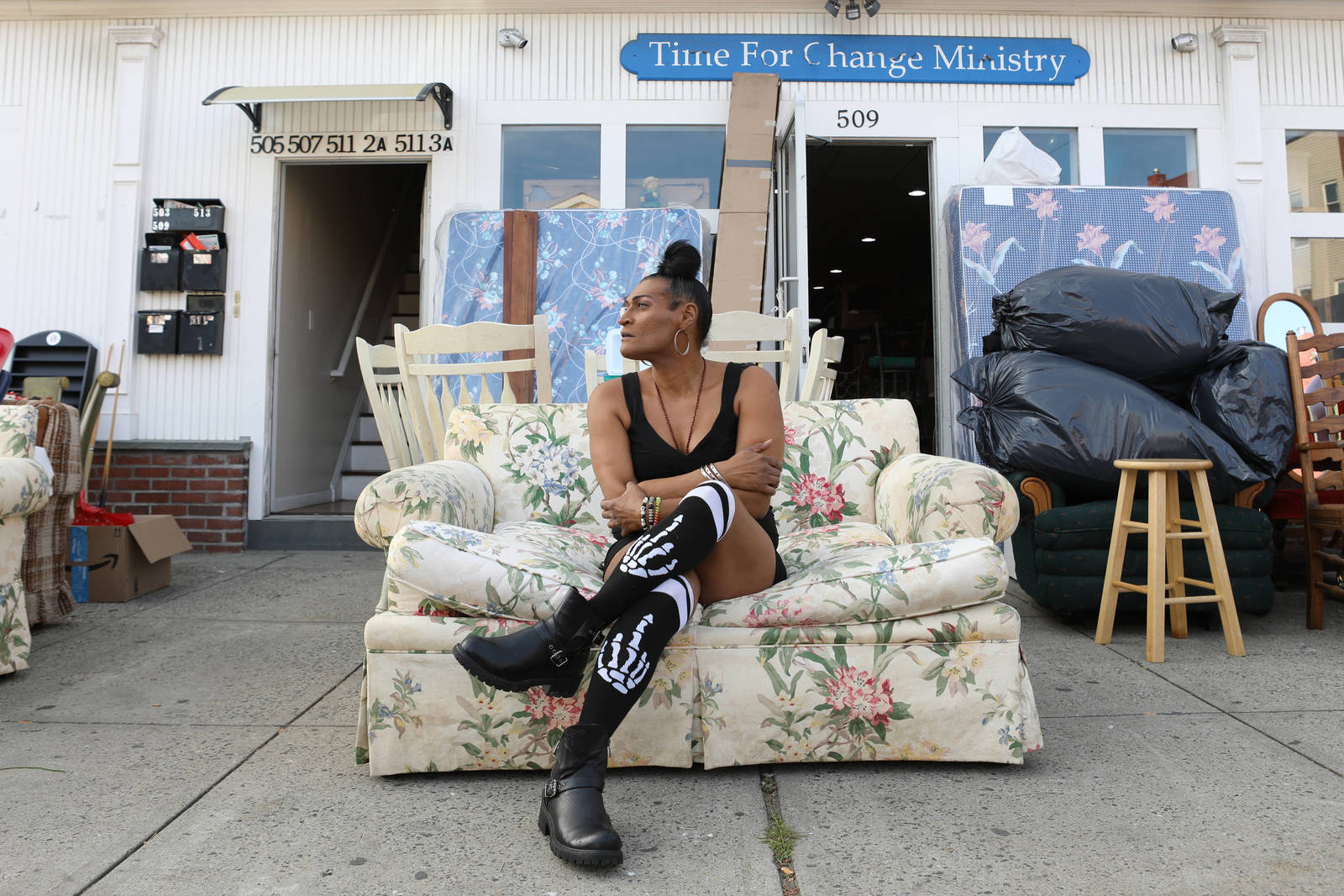 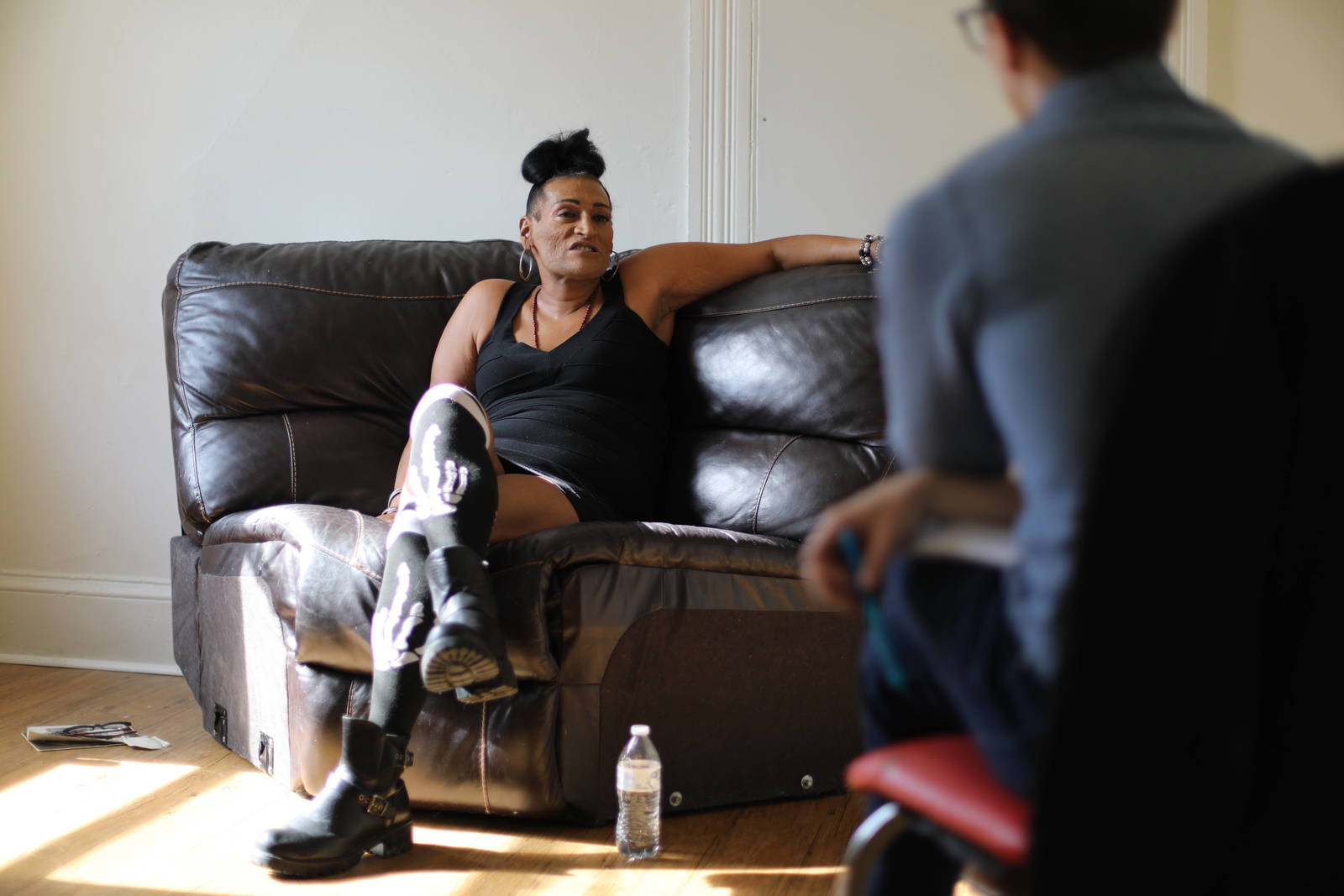 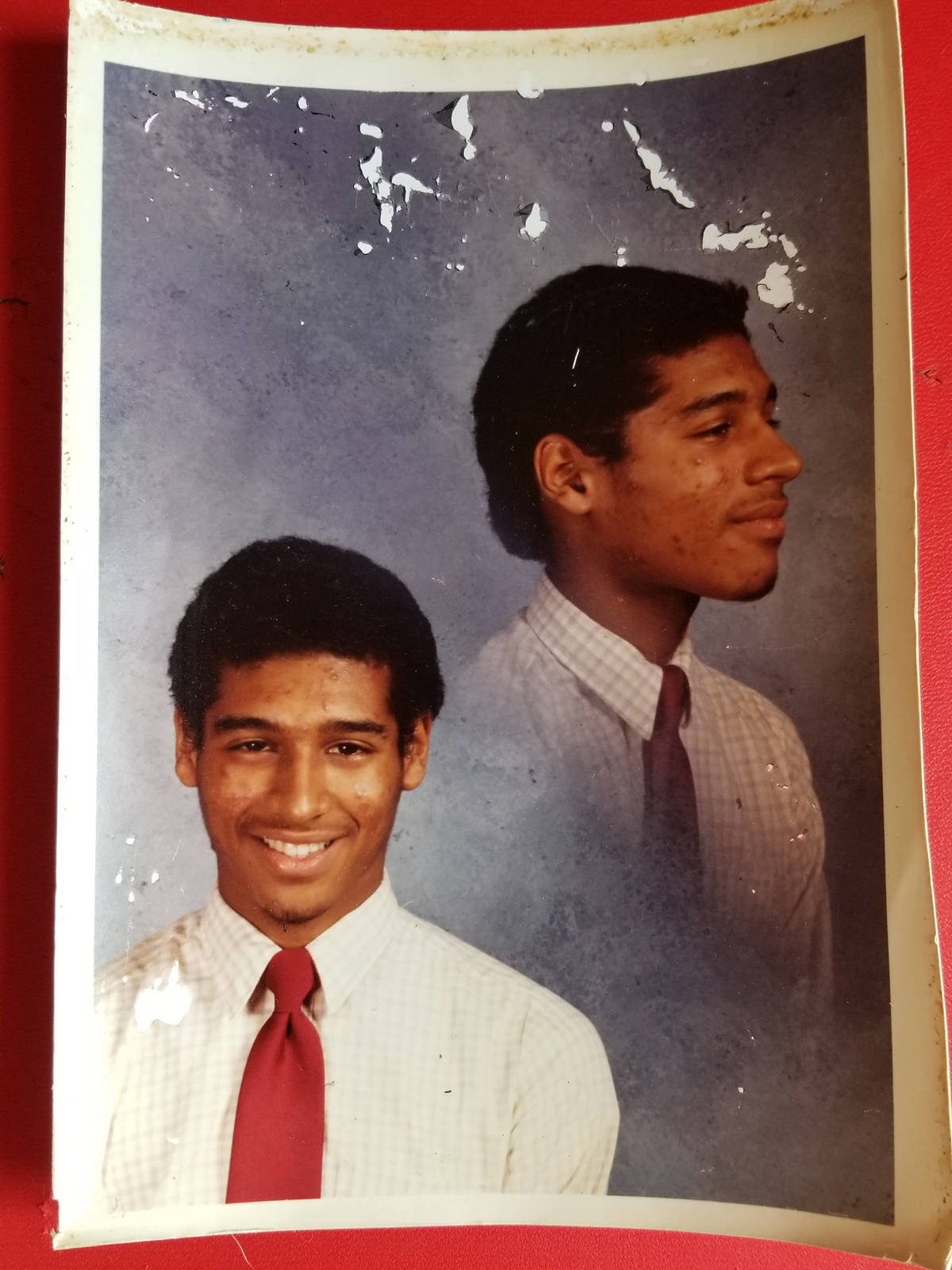 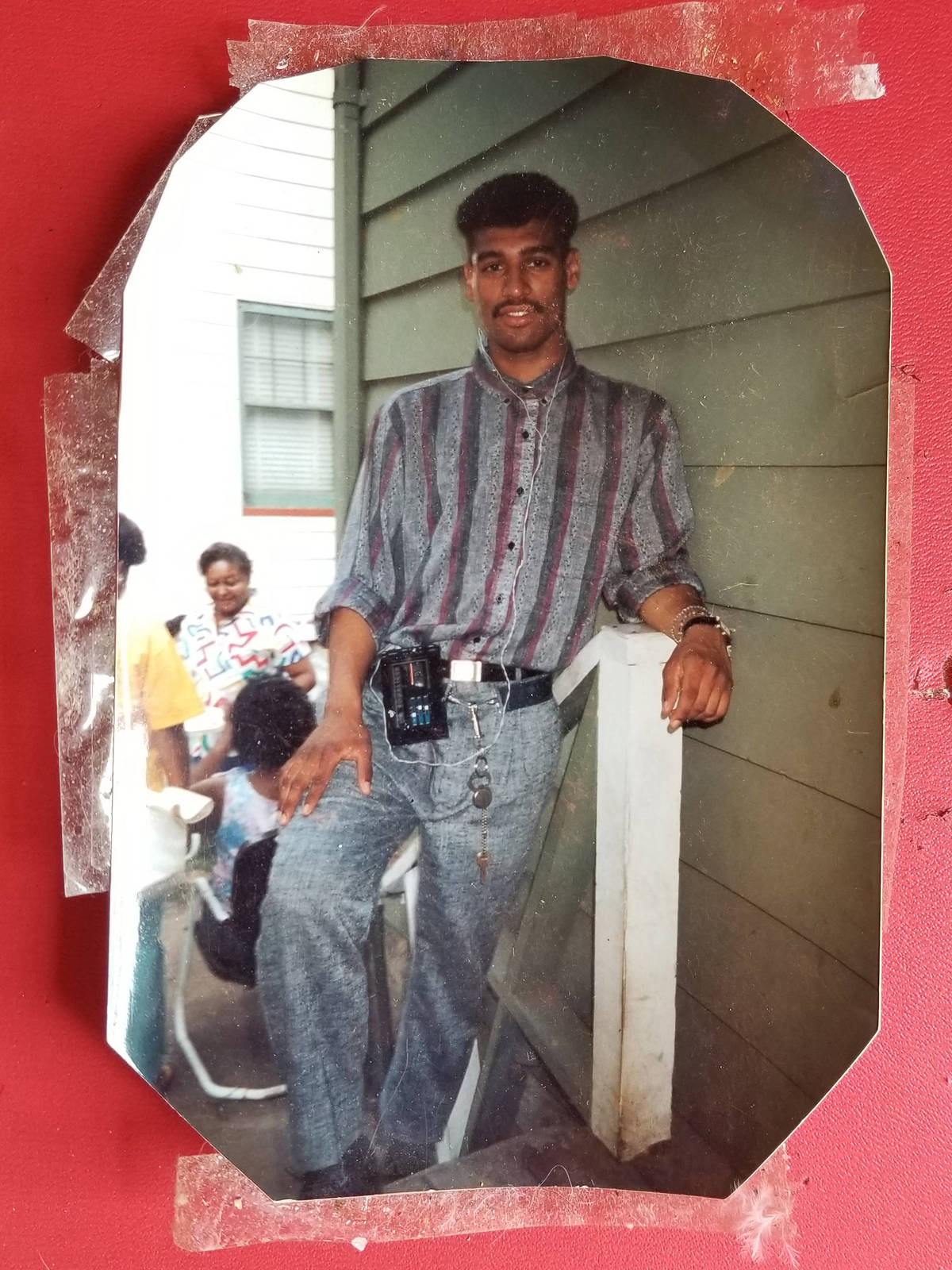 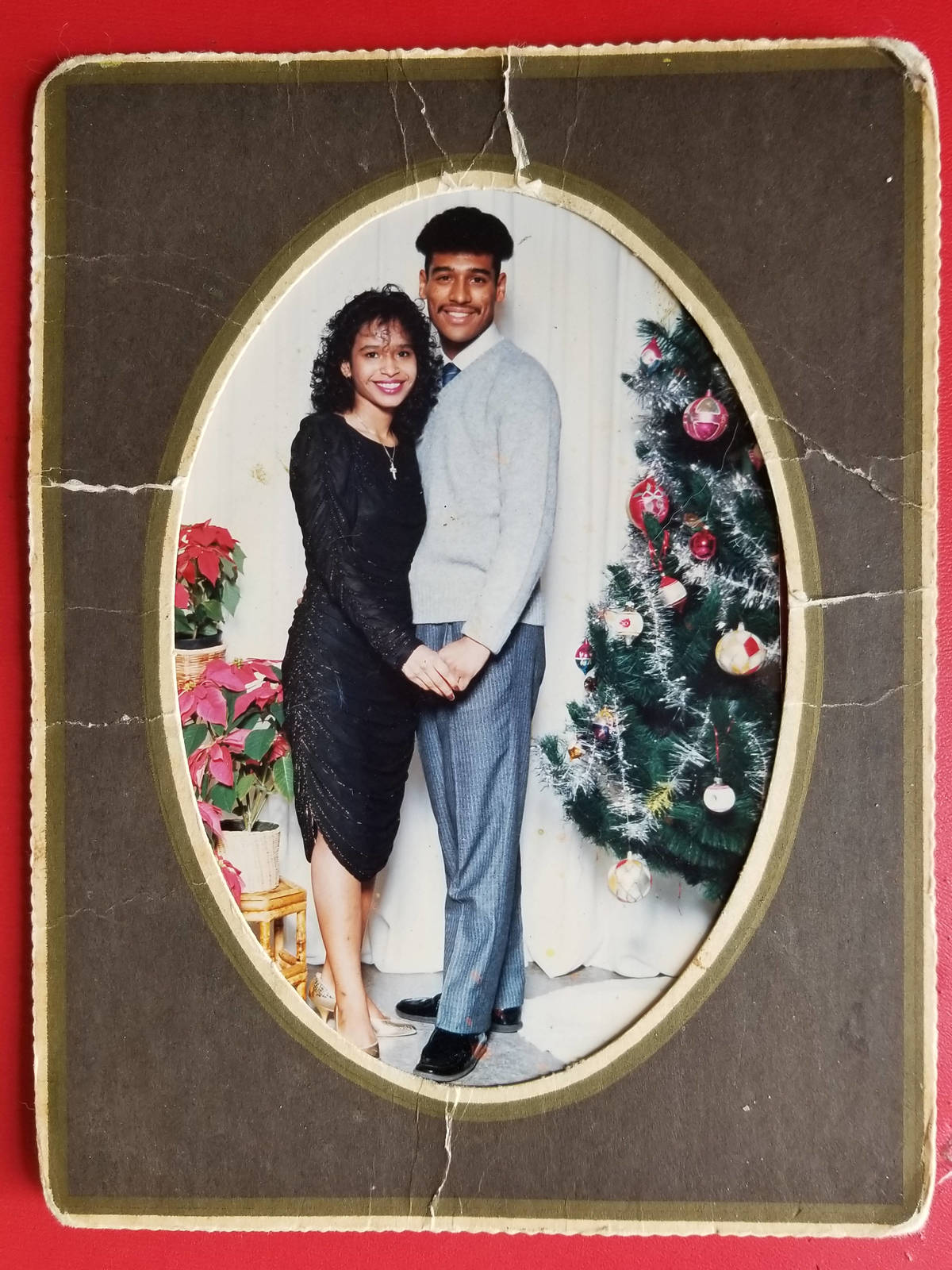 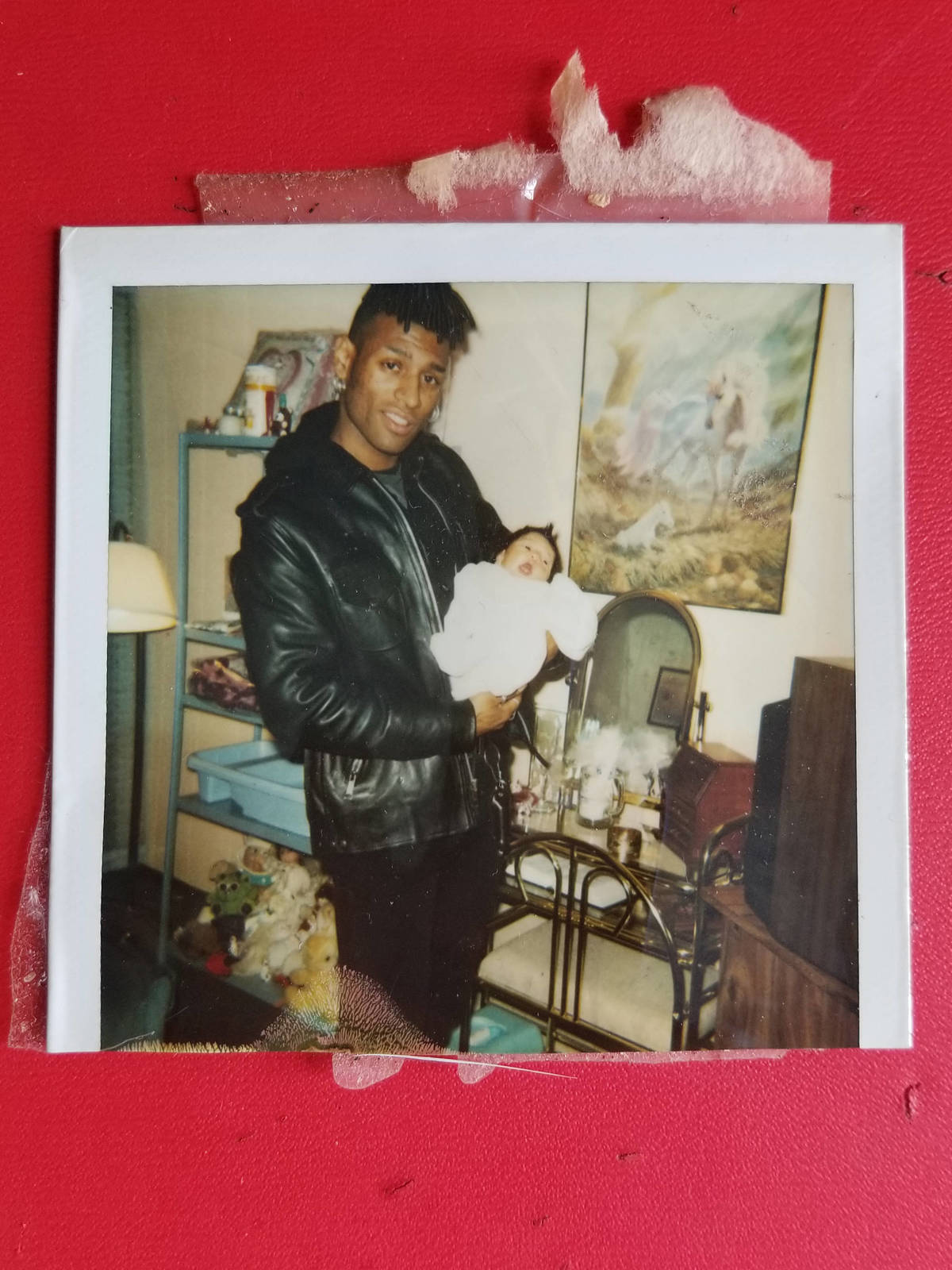 Dana is a woman.

Following her up to her apartment, my eyes at her calves as she ascended the stairs first, a message stared back at me; one I only assume is a personal mantra of hers. Arising from the tops of her platform ankle boots, one word on each knee-high black sock, was a tightly knit missive: Fuck Off.

Entering a nearly empty living room off the kitchen, furnished with a previously-owned corner piece of a leather sectional and a metal chair, she passed off a handful of old photographs. The pictures were of David; tall and handsome. David as a child; as an acned teenager; posing near a Christmas tree; on a porch with his Walkman strapped to his belt. David no longer exists. With her impending gender affirmation surgery, Dana hopes to succeed in putting more distance between herself and the haunting memories of David.

Dana sat down across from me, crossed her long legs, and pursed her lips. With a daring eye that others might recognize as her signature, she waved an arm and instructed, “Well, ask away.”

In the 1970’s, young elementary-aged Dana, inquisitive and confused, went to the public library in Bridgeport, CT to research different sexualities and identities. Recalling her thought process at the time: “I’m not a man. I’m not a woman. What am I?” In that library, she was introduced to a new term she had yet to encounter: transgender.

In a household defined by traditional Latin machismo, she was constantly criticized for crossing her legs at the knees or playing with her hair. As she aged and discovered the words to fully claim her identity, the yearning to be in a body that reflected that identity became all-consuming. “I was miserable. I would go to bed and cry to wake up as a girl. I had panic attacks. There was a point where I had a panic attack being so desperate to be a girl, I didn’t sleep for two days.”

But Dana doesn’t recall getting outwardly bullied by her peers. “When you hide who you are, that’s when people attack. When you’re open about it, nobody will attack you.” A creed she has convinced herself is true is often rarely the case for others. But Dana somehow escaped the regularly expected fate of other queer youth. She surrounded herself with cis-female friends who would’ve protected her no matter what. When schoolboys would want to date those girls, Dana’s response was a possessive “You gotta get through me, ‘cause I’m Mutha!”

From hospitals, to clinics, to hospice care, Dana fought for her life while often having to endure cruelty from care providers. At one point, she had been placed in a room of coma patients for weeks on end in a form of solitary confinement. At another point, while dealing with incontinence, she was under the supervision of a nurse who refused to change her sheets. “You could smell the death in that place; like rotting flesh. ‘Is this real?’”

Then, in facilities like the Leeway AIDS clinic in New Haven, CT, she was given her humanity back. She was part of a family. She improved. She was able to walk away. Of the more than twenty patients she spent the majority of her time with there, she was one of only four who walked away.

Leaving the 1980’s with her positive diagnosis and uncertain future, she was ushered into a coming decade marked by even further trials. Being an HIV+ trans woman in her early twenties with no financial resources, like many disadvantaged young queer people of color in similar situations at the time, Dana became a sex worker. “I was international”, she boasted with pride. “I tricked in Rhode Island, Boston, Jersey, the four boroughs, and New York. I was international. I was known. But, you see, back then – that’s when there was money.”

With newfound finances, Dana sought out fabulous clothes, more refined clients with deep pockets, and the release and inhibition that came with drugs. Spiraling into the latter vice, Dana developed an addiction to crack cocaine during this period.

"It got to the point where it was so bad, I was selling myself for two, five, ten dollars. I started smelling. When you’re on that drug, you don’t care. I was at the lowest. That little drug destroyed my life. That little one drug. That’s the devil in a bag. ‘Cause you could have everything in this world and, once you start that, everything you got is gone."

Dana often chose to forego paying for food, lodging, or even medication if it meant she had money for drugs. She was abused by clients and strangers who took advantage of her emotional and physical state. Dana was raped three times during this episode of devastation. With a 9mm held to her back, with a razor to her throat, with blows to her face, Dana recalls the experiences of begging for her life.

Having to face horror after horror, Dana seemed to still manufacture a path to perseverance. To shield herself from the realization of her extreme trauma, she became entrenched in the faux-glamour of New York nightlife. Dana was a Club Kid. Dana was in the House of Manifique. Dana vogued and bumped shoulders with celebrities and artistic royalty as they vacationed in a lifestyle that she still had to own in the morning.

Dana is a living artifact of queer history. And like many similar artifacts, her spirit and tenacity in the face of adversity were commandeered; appropriated by those more fortunate in order to gain profit. They left people like Dana behind; uncredited relics.

Now, 51 years old, Dana lives back in Bridgeport, CT, in the same neighborhood she was raised in. Some only remember her as Dana. Some remember a different name.

A life entrenched in trauma, Dana dealt with it the only way she knew how: building up her defensive emotional walls of the most durable materials. But there seems to be one clear solvent to erode the mortar: the desertion and betrayal from her family. Dana can speak of the AIDS clinics, the rapes, the drug abuse with solemnity but with distance between herself and the horrors those experiences wrought upon her. Her family is different. Through sobs, Dana explained:

In spite of having lived a life that would make even the most steadfast among us crumple, Dana is hopeful about her future. She is so close to attaining her gender affirmation surgeries. Her Connecticut Husky Insurance plan will cover the cost after having been officially diagnosed with gender dysphoria by a psychologist. None of this would have been possible before, since she would have had to cover the entire cost out of pocket.

“That’s been my dream since I was a child. And now that we have the opportunity, I’m gonna go for the opportunity…It’s a lot to go through. You have to be on them or they will forget you. Because the state is paying for it, so you’re just like another person.” In fact, this is only happening because a message she sent to a doctor two years ago only just got responded to this last October. With cogs now in motion, Dana is thrilled to be receiving additional support from Health Care Advocates International who will be covering all the travel and incidental costs of the procedures not covered by her insurance plan. HCAI Chief Medical Officer Dr. Gary Blick has been a constant advocate for Dana since 1999, when he first took her on as a patient for her HIV.

When asked what the first thing she will do is once she has the surgery, she answered, “Relax”.

“I’m nervous. My dream [is] gonna come true. I’m finally gonna be complete…Once I’m complete, my depression will go away. I won’t be so panicky. I can live a normal life.”

She imagines a future away from Bridgeport where no one knows her. “To be married. To live in a white-picket house. To adopt kids and live my life as me!” She envisions the possibility of domestic bliss within the grasp of her black-polished nails once her procedures are complete.

Earlier in our afternoon together, when discussing her HIV diagnosis, Dana remarked that people she knows are often surprised at how healthy she looks and ask if she has been “cured” of HIV. “There is no cure,” she’ll say to them. “The cure is the medication.” She is correct. The medication we have to suppress viral loads and make PLHIV as healthy as possible is the closest we can get to an available cure for now. It doesn’t get rid of the virus, but it makes it manageable; livable.

The same is true of Dana’s gender affirmation surgery. No surgery will cure her trauma. No procedure will wipe away years of abuse, give her a father who loves her, or give her 51 years of the affirmation she deserved. There is no cure. As much a cure as her HIV medication is, Dana’s surgery cannot rid her of a pain which has burrowed itself into her DNA. But the surgery might make that pain more manageable. Being able to feel more comfortable in her body might make life not just livable but thrive-able. I hope it does that for her.

“I thank God that I’m alive to tell my story. I’m not scared to tell it. I’m not. Everybody knows I’m an open book. You want to know about me? Don’t ask her. Don’t ask her. Ask me.”

Dana is a woman.